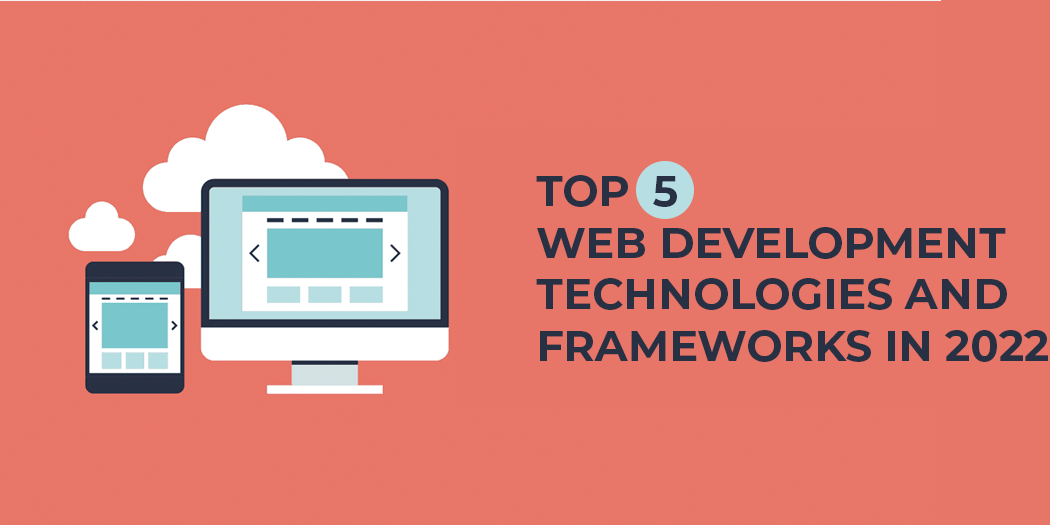 The web development industry has had some major changes over the past few years, and it’s important to know what those are if you’re planning on building an online presence in the near future. For example, did you know that responsive design has been considered the default approach to developing websites since 2017? With these top 5 web development technologies and frameworks in 2022, you’ll be able to deliver content that suits your users on any device they choose to use. Let’s dive in!

The newest addition to JavaScript’s arsenal, TypeScript is open source web development technology developed by Microsoft that extends JavaScript with object-oriented programming capabilities. TypeScript has gained popularity among many web developers because it offers an easier way to work with new APIs as they are added. And, since TypeScript compiles into JavaScript, it can be used with other frameworks or on its own.

As HTML5 continues to grow, there will be a greater need for additional languages like  TypeScript to help front-end web developers manage complicated code bases. In addition, as JavaScript continues to become more popular on both mobile and desktop devices (thanks in part to Node.js), TypeScript will also become an increasingly important tool for web development companies looking to save time and money.

Facebook launched React.js in 2013, it’s a JavaScript library used to create dynamic user interfaces on webpages. It has since been adopted by some of Silicon Valley’s top web development companies such as PayPal, Netflix, Bloomberg and Airbnb. To get started with React you need a coding background but it does not require previous experience with server-side languages like PHP or Java.

The framework has an easy learning curve so it’s perfect for beginners. Anyone with a coding background can quickly get up to speed on

Angular.js has been around for a long time, but it continues to grow as more people use it for web development. It’s a JavaScript-based framework that was first released back in 2009, but is still popular because of its flexibility and powerful abilities. The main reason many web development companies choose Angular.js is because of how powerful its routing capabilities are, meaning that you can have multiple pages on one site without issue.

It’s also designed to be incredibly flexible, so it can be used for a variety of different platforms from ecommerce websites to blogs. The coding required is relatively simple and it’s easily integrated with other JavaScript frameworks like Angular Material, which gives you more options when designing your website development company in usa. Another advantage is that many development companies choose

Vue.js is quickly becoming one of my favorite JavaScript frameworks for its ease of use, popularity, and performance compared to other options. Vue is based on a model-view-controller pattern (MVC) so it can be used alone or paired with other frameworks or libraries. Vue has an active community behind it, regularly releasing new versions that add improvements and new features. You don’t have to learn anything new if you already know another MVC framework such as Angular or React; many developers are switching between these frameworks, especially after Facebook announced they will be deprecating React in favor of their homegrown virtual DOM library known as Fiber.

Java is a general-purpose programming language that’s long been popular for everything from server side apps to mobile development. Due to its versatility, it’s earned a spot on our list of technologies you need to know. Originally developed by Sun Microsystems in 1995, Oracle acquired Java when it purchased Sun Microsystems in 2010. However, Java has more competition than ever before—it faces increasing pressure from newer languages like C# and Scala as well as platforms like Android Studio.

C#: C# is another language with a bright future, particularly for cross-platform mobile apps. It’s currently used primarily on Microsoft platforms, but it was developed by Microsoft alongside